Blockchain and it’s impact on the Financial Sector 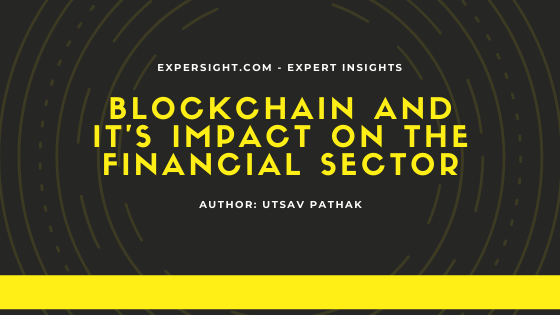 Cryptocurrencies and their underlying blockchain technology are being touted as the next-big-thing after the creation of the internet. One area where these technologies are likely to have a major impact is the financial sector. The blockchain, as a form of distributed ledger technology (DLT), has the potential to transform well-established financial institutions and bring lower costs, faster execution of transactions, improved transparency, auditability of operations, and other benefits. Cryptocurrencies hold the promise of a new native digital asset class without a central authority.

So what do these technological developments mean for the various players in the sector and end users? Blockchains have the potential to displace any business activity built on transactions occurring on traditional corporate databases, which is what underlies nearly every financial service function. Any financial operation that has low transparency and limited traceability is vulnerable to disruption by blockchain applications. DLT is therefore both a great opportunity and also a disruptive threat.

Next-generation startups will build new services and businesses with blockchains. Many pundits expect blockchain, as a distributed technology, to become the foundation for new services and applications that have completely different rules from those running on hierarchical and controlled databases. Cryptocurrencies are an early example but many others will follow. The financial services sector is full of intermediaries such as banks that help create trust among transacting parties like lenders and borrowers. Blockchain is a mechanism to create trust without centralized control. The power of eliminating intermediaries is the ability to lower transaction costs and take back control from powerful financial intermediaries.

Regarding cryptocurrencies, most of the value today is tied to speculative buying rather than actual use cases. Cryptocurrencies have their own instabilities, but they aren’t tied to actions by central banks and that’s particularly relevant in countries and economies where citizens don’t trust their governments and central banks. Any financial operation that has low transparency and limited traceability is vulnerable to disruption by blockchain applications.

The first wave of applications to be rolled out in “private” blockchains where a central authority such as a financial institution and its partners are the only ones with the permission to participate. Applications in the private blockchains, will be more secure and will offer some of the benefits of decentralized ledgers but will not be radically different from the way things work at present. When securities are traded, intermediaries provide trust, and they charge commissions. Blockchains can help provide such trust in a low-cost manner. But trade of securities is governed by securities laws. Smart contracts offer a way to ensure compliance with the laws. They have great potential because of their ability to reduce costs while being compliant.

One area ripe for transformation is reaching consensus on important benchmark rates and prices. At present, different proprietary indexes are used to determine interest rates and the price of many mainstream assets. Blockchain can transform this. Think of the London Interbank Offered Rate (LIBOR) and the recent scandals involving manipulation of benchmark values when they are controlled by a single entity that may not be capable of detecting false or fraudulent data. Blockchain could provide greater transparency around the process of creating agreed-upon reference prices, and allow more people to participate in the consensus process.”

Some areas intermediaries will find their roles reduced as blockchain allows for automation through greater transparency and traceability. In other areas, intermediaries will find themselves well-placed to take advantage of the changing needs of their clients, as firms will need help to manage the shift to new standards as well as the greater complexity of open and traceable blockchain infrastructure. Intermediaries in areas that could potentially be disrupted.

It’s usually not helpful to focus on what aspects of a major existing market will be “transformed” or “disrupted” by new technologies. Important technologies are far more likely to be integrated into the system than replace it. While some firms will fail to make the transition and some new ones will take hold, “over the long-run, virtually every historic innovation that eliminated some forms of intermediation also created new forms.”

Blockchain will reduce the massive duplication of information that creates delays, conflicts and confusion in many aspects of financial services. When a syndicate of lenders participates in a loan, having one shared ledger means they don’t all need to keep track of it independently. International payments and corporate stock records are other examples where there are huge inefficiencies due to duplicate record-keeping and intermediaries. End-users won’t see the changes in the deep plumbing of financial services, but it will allow new service providers to emerge and new products to be offered.

Challenges along the way

There is a lot of excitement about blockchain as a distributed ledger technology for the financial sector because many believe that it offers a better, more efficient and more resilient form of recordkeeping. Blockchain technology is, at core, group recordkeeping. This requires collaboration with and across businesses, which is a potentially big hurdle, and may be the hurdle that most limits adoption.”

Governance is the biggest challenge in decentralized organizations. Members participating in a blockchain-supported financial function may have misaligned incentives, and can end up in gridlock, or with a chaotic outcome. The power of eliminating intermediaries is the ability to lower transaction costs and take back control from powerful financial intermediaries. Distributed organizations serving an open community need to take care to design their governance systems, incentive structures and decision-making processes to create consensus without unduly slowing down the decision-making. Forward planning enables organizations to swiftly respond in a predictable way that is supportive of stakeholders. Publicizing these plans in advance can also build trust and user confidence.

There are a variety of risks and vulnerabilities related to cryptocurrencies: Bitcoin has shown that the fundamental security of its proof-of-work system is sound, but it has major limitations such as limited scalability, massive energy usage and concentration of mining pools. There has been massive theft of cryptocurrencies from the centralized intermediaries that most people use to hold it, and massive fraud by promoters of initial coin offerings and other schemes. Manipulation is widespread on lightly-regulated cryptocurrency exchanges.

Money laundering and other criminal activity is a serious problem if transactions do not require some check of real-world identities. There are major efforts to address all of these risks and vulnerabilities. Some are technical, some are business opportunities, and some are regulatory questions. There must be recognition among cryptocurrency proponents that maturation of the industry will require cooperation in many cases with incumbents and regulators.

Given all these challenges, what is the current mindset in the financial sector towards adopting these new technologies? And, importantly, should one push for wide acceptance and deployment, or is there need for them to stabilize first?

Cryptocurrencies and blockchain technology in general, are immature currently. However, there are some areas where they are already able to be deployed effectively. The best way to work through today’s problems, is to build working systems and see where difficulties arise. Looking ahead, integration with law, regulation and governance will be critical. Blockchain and cryptocurrencies represent a new form of trust. They will only succeed if they become sufficiently trustworthy, beyond the basic security of the distributed ledgers. Law, regulation and governance are three major mechanisms to produce trustworthy systems that scale up to society-wide adoption. We need to find ways to address the legitimate concerns of governments without overly restricting the innovations that blockchain technology enables. I’m optimistic about that process over time.

We need to find ways to address the legitimate concerns of governments without overly restricting the innovations that blockchain technology enables.

Though there are claims that some consortia are putting ‘blockchain’ systems into production, in many cases it appears that what they are calling a blockchain bears little to no resemblance to the original blockchain technology behind Bitcoin. In many instances, existing shared databases are being called ‘blockchain’ for marketing purposes. If people do use something they call DLT or blockchain technology in important financial systems, my hope is that they make the decision based on actual capabilities of the tech rather than its widely hyped and generally overstated capabilities. Permissioned blockchains, which are the variation most likely to be used for financial systems recordkeeping, are very different from public blockchains like Bitcoin or Ethereum. I hope that a more modest and accurate understanding of the actual characteristics of permissioned blockchains sinks in before they are widely adopted.

Regarding cryptocurrencies or crypto assets, the financial sector’s interest is “less about recordkeeping and more about a new financial asset that it can make money off of. At present, there is no clarity on how power and accountability work in these systems. The ongoing operation of cryptosystems and the value they embed and support is reliant on the competence of, and ethical behavior by, unaccountable software developers and validators. The financial sector believes it understands and can manage the risks of crypto assets, but I am less certain and worry that hubris and greed are driving the push to create crypto assets as a real asset class. This has been a bad mixture in the past.

The financial industry is cautious about the new DLT technology. To build confidence in new blockchain systems there needs to be transparency around how the processes work and what the benefits are, and in order to secure adoption, they need to be straightforward to use.  Early adoption of blockchain will likely happen in the background of business processes. Companies should get involved now, even if it is just to experiment with the concepts. By gaining familiarity with these new tools, they will be ready as space continues to develop.

In the next few years, many more businesses will implement private blockchains to improve the transparency and traceability of their financial operations, supply chains, inventory management systems and other internal business systems. Clearer standards will be adopted and a few high-profile projects will emerge. Meanwhile, R&D will continue among the many decentralized blockchain projects to invent more scalable public ledgers whether it be blockchain, Tangle, Hashgraph or something new. Work is needed on better and more efficient consensus models, whether it be a new form of proof-of-stake or proof-of-work, or something else. There are many established groups, startups, companies and research teams that organizations can join, partner with, or support in order to contribute to research and expand their capabilities.” 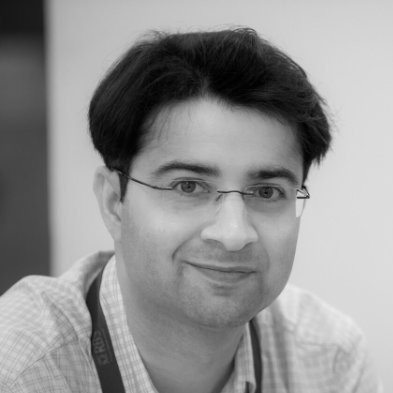 Utsav Pathak
Utsav is a FinTech enthusiast who firmly believes that in a world dominated by technology; ‘people’ must remain at the center of organizations and society, and academia is the key to helping individuals adapt and thrive within our fast paced world, in particular the rapidly developing ‘Artificial General Intelligence World.’ He looks forward to work with a generation of inter-disciplinary talent into careers yet to be conceived, alongside scaling the application of ‘emergent technology’ as an enabler for business transformation(s) and social good. He wants to be a “Thought Leader” in ‘Artificial Intelligence in Financial Services’; a Strategy Executive with experience of digital transformation who has detailed knowledge of artificial intelligence, shaping innovative approaches to solve complex issues for the clients.
email
utsav.pathak@outlook.com
follow me
×

Utsav Pathak
Utsav is a FinTech enthusiast who firmly believes that in a world dominated by technology; ‘people’ must remain at the center of organizations and society, and academia is the key to helping individuals adapt and thrive within our fast paced world, in particular the rapidly developing ‘Artificial General Intelligence World.’ He looks forward to work with a generation of inter-disciplinary talent into careers yet to be conceived, alongside scaling the application of ‘emergent technology’ as an enabler for business transformation(s) and social good. He wants to be a “Thought Leader” in ‘Artificial Intelligence in Financial Services’; a Strategy Executive with experience of digital transformation who has detailed knowledge of artificial intelligence, shaping innovative approaches to solve complex issues for the clients.
email
utsav.pathak@outlook.com
follow me
Latest Posts